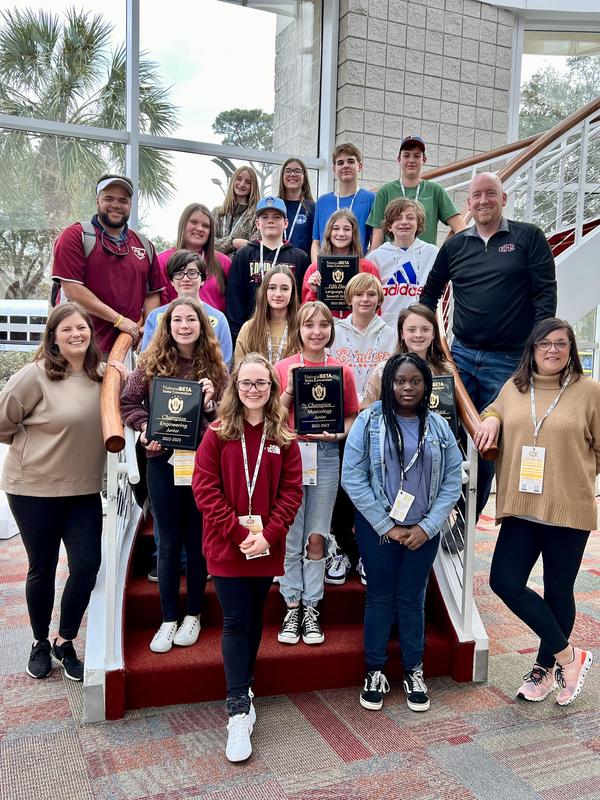 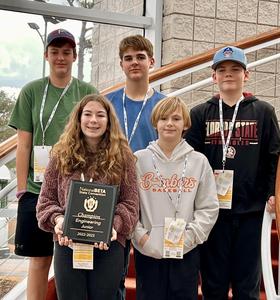 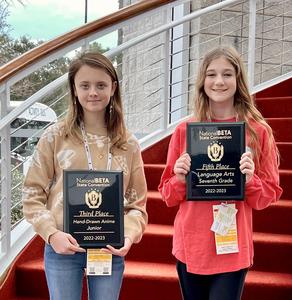 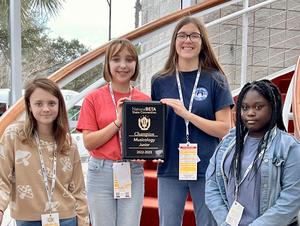 Edgewood Middle School in Ninety Six recently traveled to Myrtle Beach to compete in the SC State Beta Club Convention.  After participating in the state and national convention last year for the first time, there was no question as to whether or not the school would continue participating. The Jr Beta Club at EMS looked forward to going again and worked hard preparing for competitions.

The EMS Jr Beta Club traveled with 16 of their 21 members and competed against other Jr Beta teams from all over the state in both online and on-site competitions. The club came home with 4 top 5 finishes, two of those being 1st place.

Co-sponsor and 7th grade Language Arts teacher said, "Our EMS Wildcats showed up and showed out at this year's Beta Conference in Myrtle Beach."

Camden took a timed Language Arts test online a few weeks before attending the convention; it was only at the convention that she discovered her win! The Engineering competition requires students to build something onsite with a pre approved list of materials.  The team is then judged based not only on their build but how well the team worked together. The prompt was to build an elevator. The team was beyond excited to learn they were the Engineering champions with their first place win. This year was the first year offering Hand Drawn Anime and Musicology. The competition was incredible for the drawings even though it was just its first year. Addyson learned of her drawing winning while she was competing in Musicology. Musicology is a music trivia competition set up like a quiz bowl with brackets. Edgewood had to compete against 3 other schools only after placing top 8 after an online test. They are proud to be the first ever Champions of Musicology for the state.

"Part of the Beta Club convention is seeing how well you compete against other Betas. As a Beta Club with no more than 30 members, I believe we stacked up very well against Beta Clubs with over 100 members," Owen Carter said.

Olivia Austin said of the trip, "Competing in the Beta Club convention was really eye opening because we got to see so many diverse interpretations of the theme for this year, Beta Power."

The next steps for these students will be the National Beta Club Convention, which will be held in Louisville, Kentucky in June.

In the meantime, members are continuing to apply the Beta Club motto, Let Us Lead by Serving Others, to all aspects of life. Students focus on academic achievement, character, service and leadership skills. Many EMS students not only are part of Beta but also participate in other school activities, teams, and clubs. They balance all of this while also serving others by volunteering in their community.

"I couldn't be more proud of the students who competed this year. Competing at convention allows these students to shine. I am thrilled they have this opportunity and proud of the leaders they are becoming." Sponsor Carrie Garner